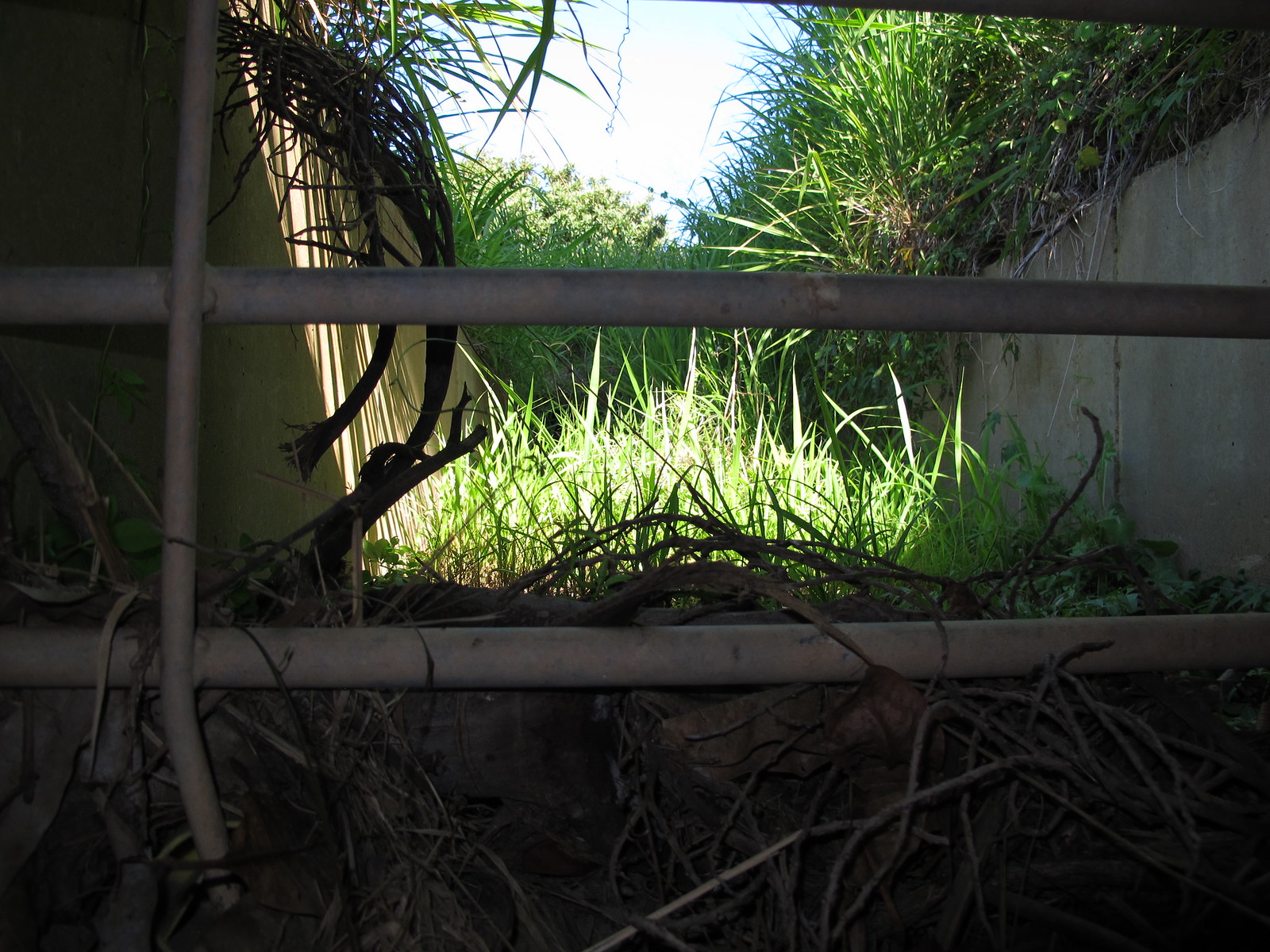 I knew they were doing some underground work at Stanley St, so decided to visit the area via this drain. Although it was apparently sewerage infrastructure they were upgrading, I thought they may have opened up the stormwater drain also.
I entered the drain at the usual location and began the walk downstream. Being daytime, the usually dark openings along the way were abnormally bright.

With the one destination in mind, I didn't stop for many photos and instead made my way toward the river. Eventually I reached the birdcage, water only ankle deep thanks to the low tide. 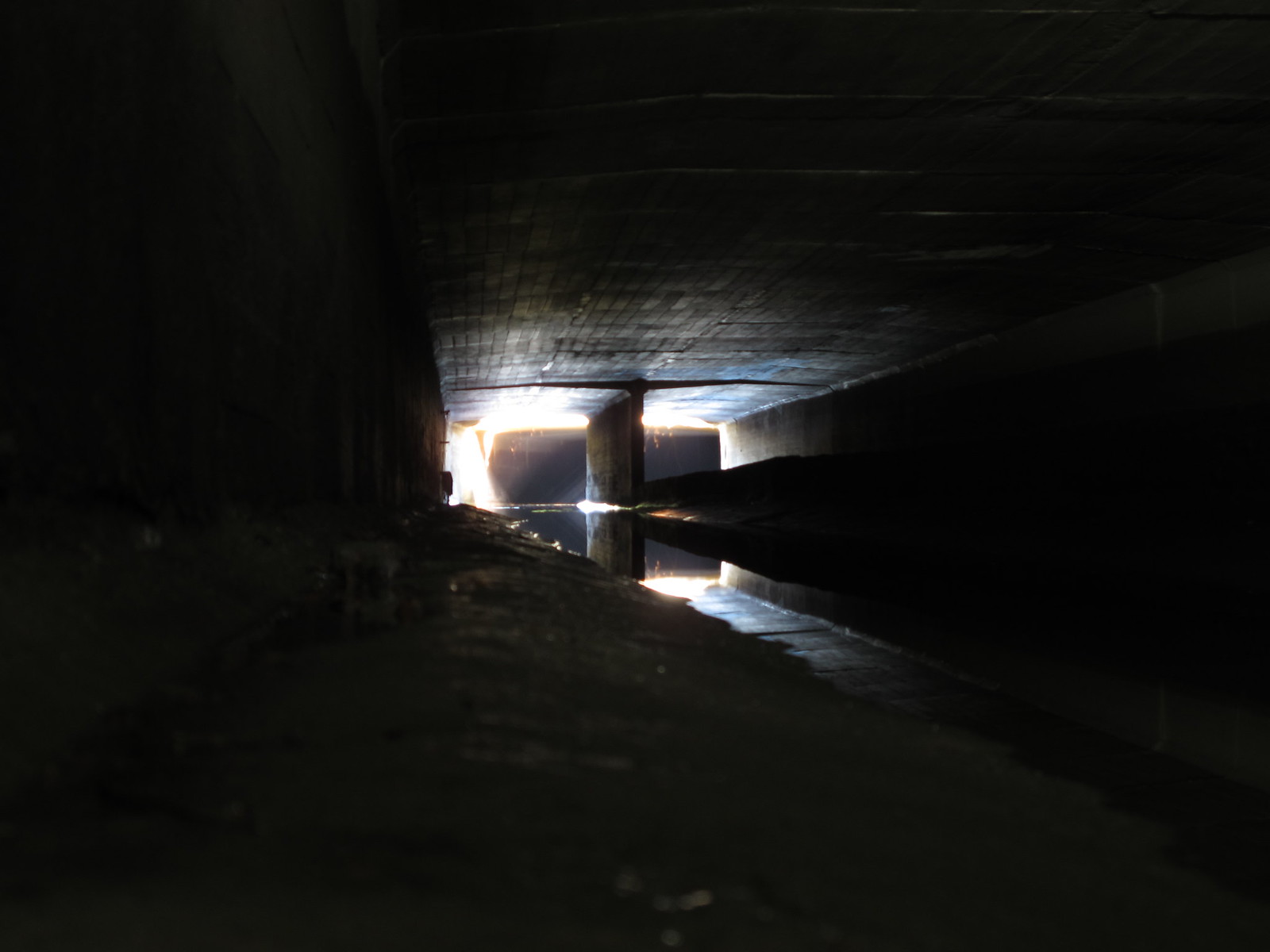 It was time to proceed back into relatively uncharted territory, walking up the alternate tunnel toward the football grounds. I was still under the impression that the tunnel would be compromised up ahead, and even though it was Sunday at 5pm, I made my way cautiously in case workers were present. As cautiously as you can be in calf deep water anyway.. Nearing the grounds, at peak alertness, I hear a mechanical noise up ahead. I stop, and a few seconds later the noise is followed by the sound of crashing water. Although I knew it was impossible for anything but heavy rain to create dangerous water levels due to the volume of the tunnel, it was too late. Adrenaline had already kicked in and I was bolting back downstream. Stopping under a manhole, I managed to relax slightly, given the conditions. After a minute I slowly continue back downstream, unsure whether to proceed. A few lengthy minutes later and the noise subsides, with the commotion barely resulting in an increase in water level.

Coming down from adrenaline I decided to attempt the voyage again, and began the walk back up. This time no noise inhibited my progress. I eventually reach the beginning of the grounds. 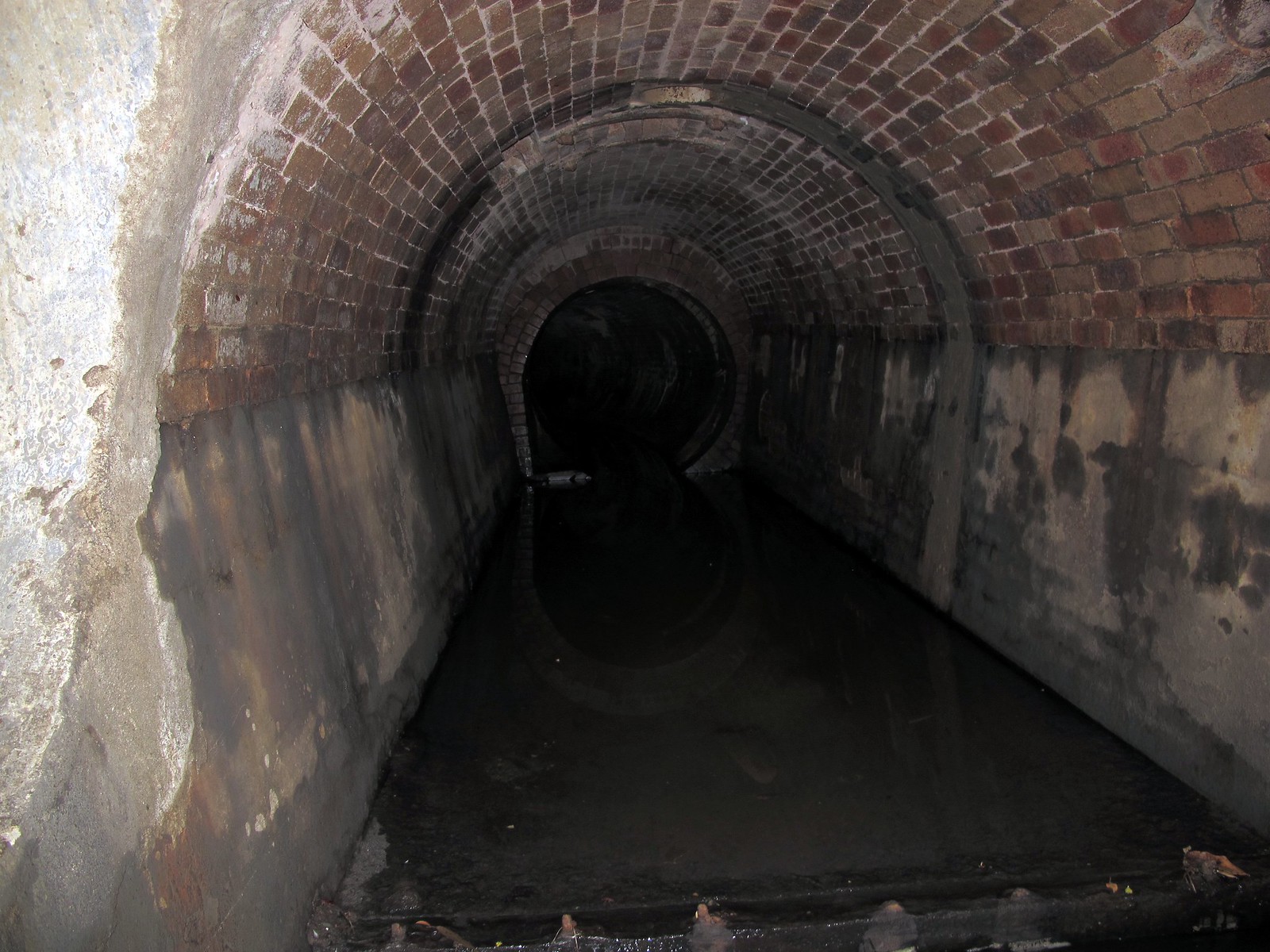 Unfortunately this was directly under the construction, and nothing had changed since last time. Evidently it was only sewer they were upgrading. Undeterred I proceeded to the other side of the grounds to take another quick photo. 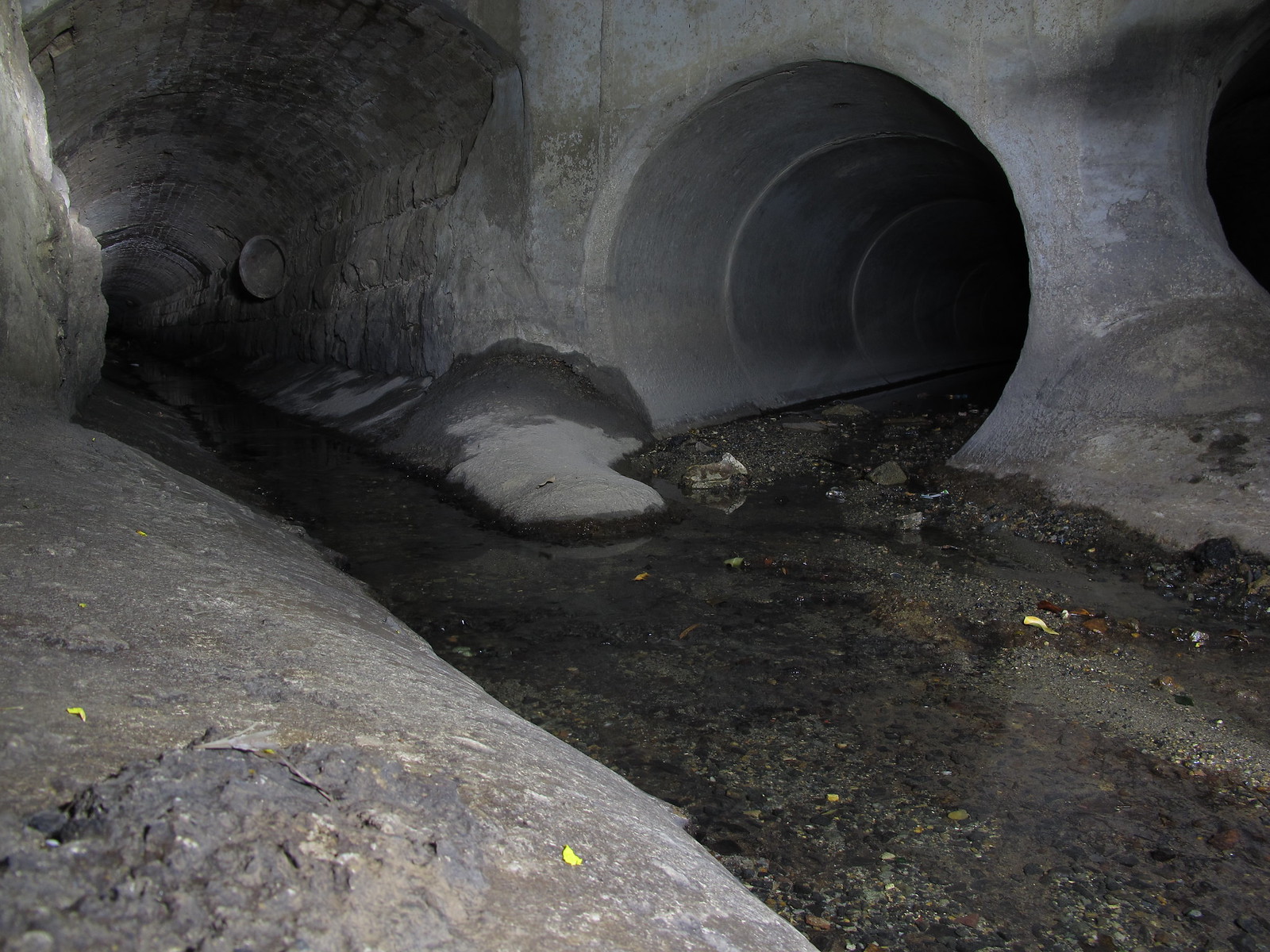 Deciding not to hang around I made my way back to the exit. Back in the main tunnel, I paused at the pit to send some messages. It was then that I heard the increasing sound of water flow. After the first scare I decided to at least investigate the source of this alternate flow. 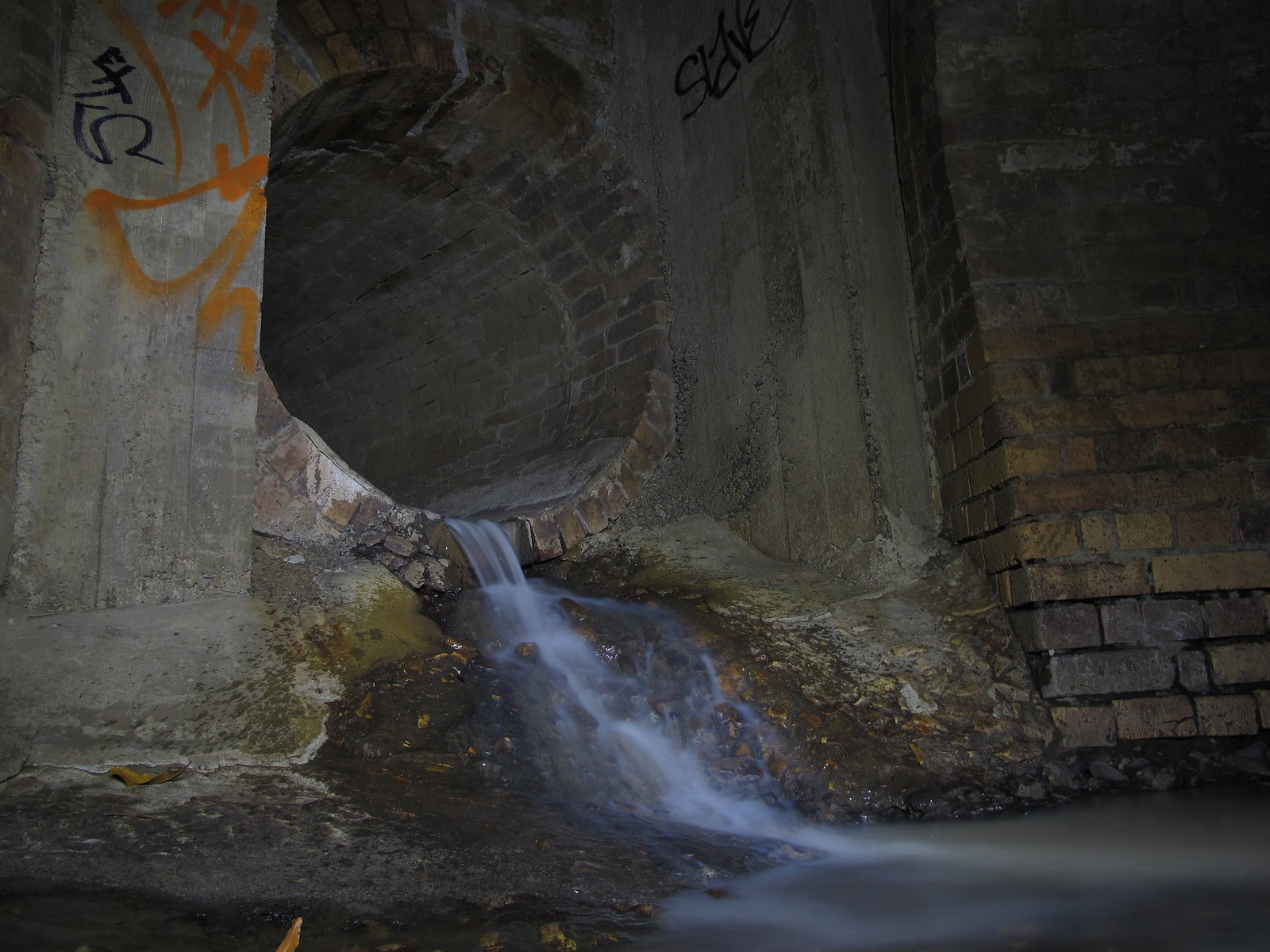 I easily located the source, since it was the closest feeder pipe and the flow had increased from barely a trickle to this. Initially transparent, the water soon became white and milky. It allowed for a decent photo though :) No idea what the actual source was, but it was a much tamer flow than I imagine the first one to have been.

Deciding that I'd had enough excitement to last a while, I began walking back to the perceived safety of the overworld. Barely 100m upstream, I begin to hear voices. Shielding my torch and creeping along, they become more distinguishable, and I identify them as a group of teens. I reach a section with grills above me and an opening to the parallel tunnel. 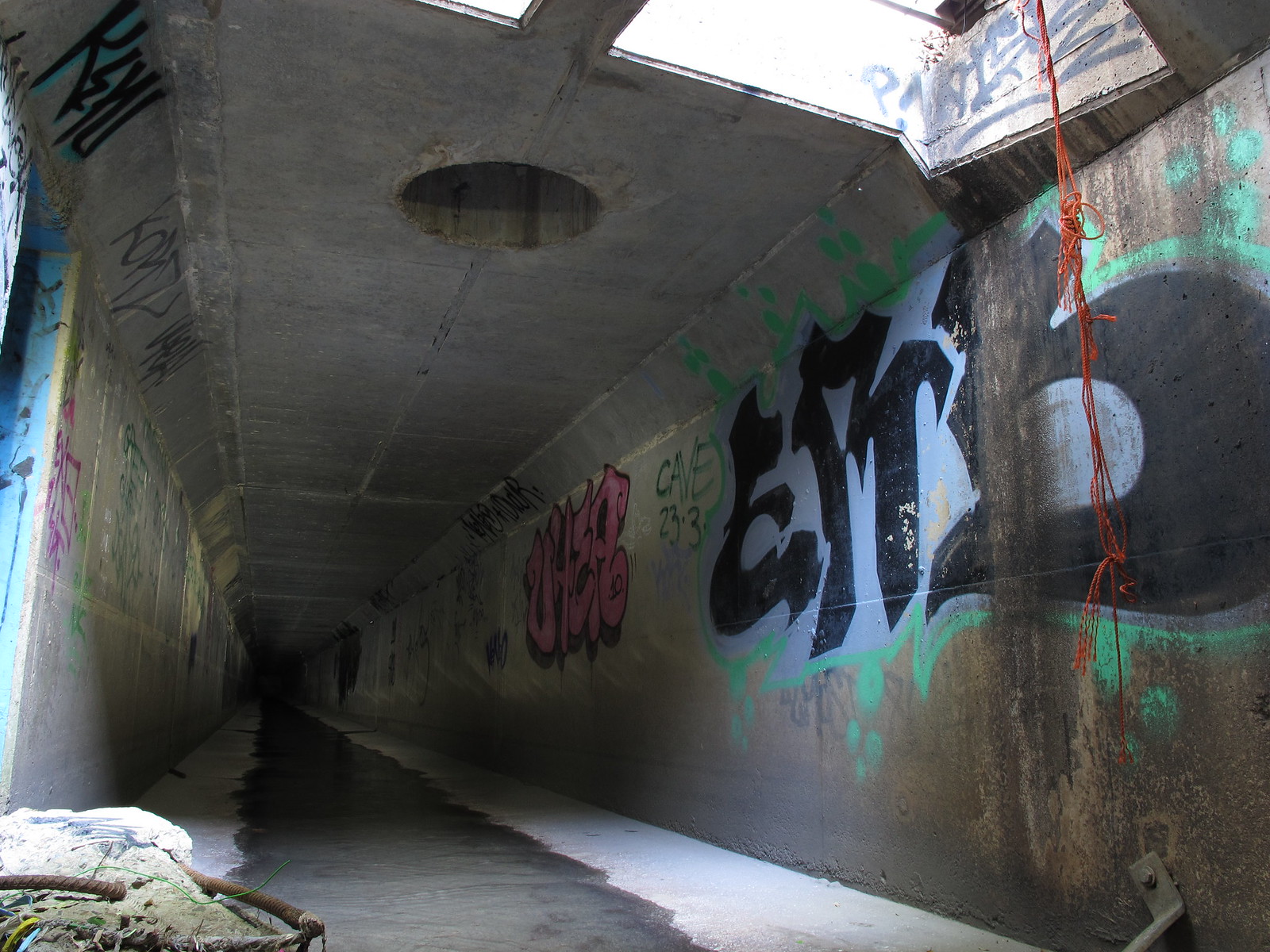 To be safe, I paused here with my light off, to wait for them to pass in the parallel tunnel, then amidst their ruckus I hear 'What the feck you doing in the tunnel' and his friend 'shut the feck up kent' (to 1st friend). Then someone else 'Well there are seven of us'. Turns out they were above me, and apparently they must've seen me from the sunlight filtering into the drain. By the sounds of it, some of them were more concerned about the potential gang in the tunnel, than I was of them...

Leaving them to their shenanigans, I hastily resumed walking back to the exit, fall out of the foliage and thankfully make my way back to my car.

Not sure if it's urbex, strictly speaking, but still a pretty interesting location, so thought I'd share for anyone interested. Got to visit these two places tonight on a job. They're the old toll tunnels from when cash payments were the norm. Money was

One of the places we visited for our UEGA Brisbane tour was Accommodator. There were many things to see, such as toxic waste. Or maybe it was just coolant... And everyone leaving in style 8-) Then is was just me holding everyone up. Could